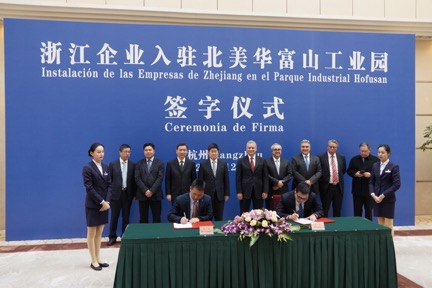 Kuka Home, China's largest furniture manufacturer, operates a network of more than 4,500 stores in China. In the first stage Kuka Home will be manufacturing sofas for the North American market and is considering exporting later to South America. This project will be its first production plant outside China. The announced investment will be USD 100 million and Kuka expects to generate 700 new jobs.

Sunon, an office furniture manufacturer with more than 800 patents, several design awards and a marketing network in more than 108 countries will invest USD 50 million in its Nuevo Leon facility. The company plans to create 900 new jobs in the new venture in Mexico. Founded in 1991, Sunon has three manufacturing plants in China totaling 700,000 m2 of productive area and its clients include global corporations such as Alibaba, Pepsi, Tata Motors and Ikea.

Holley Technology is a leading company in the manufacture of electric power automation and measurement systems. The project that will be established in Nuevo León will be spearhead in technologies 4.0. for which it announced investments of USD10 million.

These companies will be installed within the Hofusan industrial park, in the municipality of Salinas Victoria.

"These announcements represent the consolidation of the advocacy efforts we have been making in the Secretariat with these companies for several months, with some even for more than a year," said Roberto Russildi, Secretary of Economy and Labor.

This website uses cookies. We use cookies to personalize content and ads and to analyze our traffic. We also share information about your use of our site with our advertising and analytics partners who may combine it with other information that you have provided to them or that they have collected from your use of their services. You consent to our cookies if you continue to use this website.
Accept